The warming climate has made wildfires and smoke increasingly common. Researchers in the Department of Atmospheric Sciences evaluated data from a number of sources to look at air quality trends in the West. A new paper by doctoral student Kai Wilmot with Gannet Hallar and John Lin (GCSC-affiliated faculty) and Derek Mallia (past GCSC fellow) is published in Environmental Research Letters.

The following was originally published in At the U:

From the Pacific Northwest to the Rocky Mountains, summers in the West are marked by wildfires and smoke. New research from the University of Utah ties the worsening trend of extreme poor air quality events in Western regions to wildfire activity, with growing trends of smoke impacting air quality clear into September. The work is published in Environmental Research Letters.

“In a big picture sense, we can expect it to get worse,” says Kai Wilmot, lead author of the study and doctoral student in the Department of Atmospheric Sciences. “We’re going to see more fire area burned in the Western U.S. between now and in 2050. If we extrapolate our trends forward, it seems to indicate that a lot of urban centers are going to have trouble in meeting air quality standards in as little time as 15 years.”

Many of the West’s inhabitants have seen smoky summer skies in recent years. Last year, dramatic images of an orange-tinted San Francisco Bay Area called attention to the far-reaching problem of wildfire smoke. Wilmot, a native of the Pacific Northwest, has seen the smoke as well and, with his colleagues, looked at trends of extreme air quality events in the West from 2000 to 2019 to see if they correlated with summer wildfires.

Using air measurements of PM2.5, or the amount of particulate matter in the air with diameters less than 2.5 microns, from the Environmental Protection Agency and the IMPROVE monitoring network, along with measurements of fire area burned and the PM2.5 emitted from those fires, the researchers found consistent trends in air quality that correlated with wildfire activity—but that had different spatial patterns in August than in September.

Trends in August and September

Over the years studied, the researchers noticed that the mean air quality was worsening in the Pacific Northwest in the average August when sensors indicated wildfire smoke events.

“That’s pretty dramatic,” Wilmot says, “that extreme events are strong enough to pull the mean up so that we’re seeing an overall increase in particulate matter during August across much of the Pacific Northwest and portions of California. The Pacific Northwest seems like it’s just really getting the brunt of it.”

The reason for that, he says, is that the regions around the Pacific Northwest, in British Columbia and Northern California, both experience wildfires around August. The mountainous Pacific Northwest, Wilmot says, sits in the middle.

But by September, the researchers found, wildfire activity slows in British Columbia and shifts to the Rocky Mountains. The smoke shifts too—the researchers saw emerging trends correlating wildfire smoke with declines in September air quality in Wyoming and Montana. “We see the PM2.5trends start to pick up a bit more in the Rockies and they become more statistically significant, a little bit stronger and more spatially coherent,” Wilmot says.

What about Utah? The study findings show that the magnitude and significance of air quality trends increases as you go from the southern states of Arizona and New Mexico toward the Pacific Northwest. In Utah, Wilmot says, air quality trends are near the edge of statistical significance, with evidence for impact from wildfires, but evidence that’s less robust than in the Pacific Northwest and California. “Thinking about events like the smoke transport from fires in the Bay Area this past summer,” Wilmot says, “I would not be surprised to see trends in Utah become increasingly convincing with additional data.”

Looking to the future

Other researchers in other studies have suggested that the future will bring more fire areas burned in the Western U.S., with an accompanying increase in wildfire smoke exposure throughout the West and the impacts of that smoke on human health.

Wilmot notes that the trends the researchers see in the Pacific Northwest in August are “pretty robust,” he says, while the September trends in Montana and Wyoming are still “emerging.”

“I think the concern is that, given more time, those emerging trends are going to start looking a lot more like what we’re seeing in August,” he says. “I hope that’s not the case, but it seems entirely within the realm of possibility.”

His next step is to develop simulation models to more precisely link wildfire emissions in urban centers to smoke source regions.

“The big picture,” he says, “is aiming to help forest management in terms of identifying wildfire emissions hotspots that are particularly relevant to air quality in the Western U.S., such that if we had funding to spend on some sort of intervention to limit wildfire emissions, we would know where to allocate those funds first to get the most out of it.” 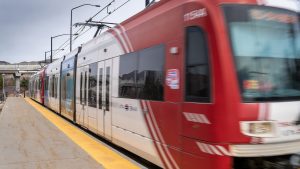