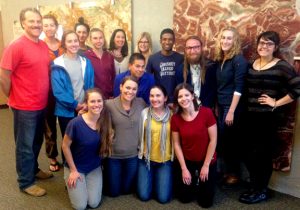 In 2016, the graduate students* of Global Changes and Society chose to look at how people know and understand climate change. The students in this interdisciplinary course found that all of their disciplines were connected in more ways than immediately apparent. The class decided that the overarching takeaways from the course were found in four areas: information, behavior, awareness, and experience. Human behaviors are driven by experiences and the information they internalize. The way individuals experience situations and places is affected by what they are aware of, individual behavior (and the behavior of others), and available information. Using this framework, the GCS project was structured into these four areas.

By collecting information about the student body, it is possible to more effectively understand how people experience campus and that information can serve as a useful guide for to find effective ways to increase awareness of climate change issues. The GCS class read a report from the Yale Center for Climate Change Communication titled “Climate Change in the American Mind” in which a nation-wide survey was conducted. Some students decided to create a similar survey to gauge knowledge on campus.

836 people took the survey and there were some stark differences when compared to the national data. Two in three (67%) Americans responded that global warming is happening while 94% of University of Utah students answered in the affirmative. About half of Americans (53%) selected that if global warming is happening, it is mostly human caused, while 69% of university respondents believed it is caused mostly by humans. Over half of Americans (57%) reported that they were at least “somewhat worried” about global warming, while those on campus 81% were at least “somewhat worried.” Three quarters of respondents believed the University could be doing more to address global warming and it was found that academic journals and formal education were considered the most reliable sources for information on global warming. 60% of students responded that sustainability is a major campus issue and 40% are unfamiliar with the Sustainability Office but would like to learn more. While only 40% participated in a past campus sustainability program, 76% reported that they were very or somewhat likely to participate in the future.

Across the board, University of Utah respondents appeared to accept the reality of global warming more than the national average, meaning that campus showed potential to be a great platform to appeal to environmentally minded individuals. Also, the university students displayed trust in educators and wanted to be more involved with sustainability initiatives, there just appeared to be a disconnect with knowledge of campus activities. Analysis and a potential paper for this project is ongoing.

Talking to several people around campus revealed that others were interested in installing dashboards. In fact, University of Utah Facilities Management wanted to eventually install them in all of the buildings on campus. With this information, the awareness group decided to install a pilot dashboard in a building while keeping expansion in mind for the future.

However, two main roadblocks prevented this from happening, technology and bureaucracy. On the technological front, to have a successful energy dashboard system, there need to be three components: smart sensors, servers, and TVs. Not all buildings had the smart sensors, and the ones that did weren’t necessarily connected to the servers that gathered the information. In addition, the servers have to have the capability to process information from so many sensors, and may need to be upgraded. Finally, the software that ran on the servers had to be configured to properly route the sensor information to the TVs.

Bureaucracy was the second barrier. While it was promising that so many people wanted to put up dashboards, none of them actually seemed to know that everyone else wanted to put up dashboards. This, combined with the technology problems meant that the awareness group was bounced between people without a lot of progress. The lack of communication between groups made it difficult to implement ideas. Ultimately, the awareness group was excited about the project, but didn’t think the bottom-up approach of getting it implemented was working very well. Future students may have better luck trying to enable more of a top-down approach, which will increase organization and motivation.

The members of this group applied for a Sustainable Campus Initiative Fund (SCIF) grant to get the necessary infrastructure in place. The SCIF grant requested $5000 for approximately 50 glass recycling bins that could be placed around campus. Some of the SCIF grant went towards getting color signs printed to promote the new recycling bins around campus. In addition, University of Utah waste management said they would match the SCIF funding to purchase a 20-yard roll-off dumpster to hold the used glass until it could be taken to the recycling center.

Happily, the project was funded, and the recycling bins will be placed around campus Fall 2016. This is how it will work: The students will use the recycling bins and the freshly trained custodial staff will fill the roll-off dumpster with the used glass. Once the roll-off is full, a University owned truck will transport the dumpster to Momentum recycling where it can be recycled. Momentum will pay the University approximately $14 per ton of glass, which amounts to about $70 per dumpster. These funds can be used to pay for wear-and-tear on the truck, or to buy new recycling cans for more buildings. For experience, one group of the class focused on “Embodied Knowledges,” referring to instinctive knowledge, or
information that our bodies know and use without conscious thought. The group engaged the concept of ‘embodiment’ to center the body itself as an agent of knowledge production (Wilcox, 2009). Lived experiences are one kind of embodied knowledge. Lived experiences are embodied experiences – because it is through our bodies that we interact with and understand the world. The group was interested in how embodied knowledges could be equally valued within the sphere of climate change research and took particular inspiration from a class reading Akerlof, et.al. This reading described the relationship between Michigan residents’ perceived experiences of climate change and their belief in it, ultimately concluding that yes — if people experience or think they experience climate change, they’re more likely to believe in it. In fact, according to the study, personal experience of ‘global warming’ accounts for a distinct variance in people’s risk perception of climate change that cannot be fully explained by their demographics, political party affiliations, or surrogate measures for cultural worldviews.

This group hoped that by locating the bodies’ lived experiences alongside the survey, we could explore a differently nuanced facet of the cultural climate around climate change at the University. The findings could illuminate a bit more about how the lived experiences of students at the University impact their understanding of climate change. The group decided to do a PhotoVoice project using GCS students as a sample group. Photovoice is a qualitative research method where participants reflect on research themes from their own aesthetic perspective. In this project, students answered a series of four questions by taking photos. Then, each participant was interviewed about the story told in the photo in hopes of pulling out larger themes from the responses.

The four questions we asked were: 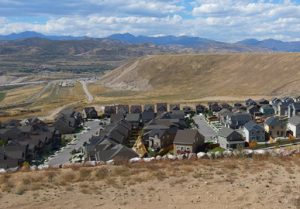 During the interviews, the group observed several interesting things. The first was that even though these were students who not only believe in climate change and are clearly passionate about environmental issues (thus their location in the course), most participants felt that this project brought their own personal relationship to climate change to the forefront.  Their lived experiences were amplified by the process of reflecting, documenting and crafting an aesthetic perspective on their experiences. The second interesting item to note was that many participants mentioned the unique ways in which their discipline influenced how they perceived and experienced climate change, and even how they went about the project.

By thinking about our experiences, humans become more aware.  The experiences of the Global Changes and Society course help to drive our behavior, the way we process information, and how aware we are about specific issues. By consciously sharing experiences, members of the course will begin to share information, behavioral decisions, and awareness with one another. The four facets of this project tied well together, all aimed towards understanding and affecting the culture around climate change at the University of Utah. The survey gathered quantitative data, the photovoice project gathered qualitative data, and the dashboard concept would provide a place to display information towards behavior change, while the glass recycling initiative was a clear direct action. Together, the Global Changes and Society project fostered information, behavior, awareness, and experience.