–Jeremiah A. Bernau, Brenda B. Bowen

I am a PhD candidate working with Dr. Brenda Bowen on the Bonneville Salt Flats. My research focuses on water movement on diurnal to millennial timescales in arid settings. I hope to use my research to inform resource and landscape management decisions as water resources change with climate change.

We examined the late Pleistocene to Holocene depositional record of shallow cores from the Bonneville Salt Flats, Utah. This record provides insights into the interpretation of similar systems. It offers a geologic perspective to significant changes in the volume and extent of the Bonneville Salt Flats in the past century. There was a shallow persistent saline lake similar to the modern Great Salt Lake at this site from 40,000-30,000 years ago. Strontium isotope data indicates this lake was sourced from Great Salt Lake Desert waters. One to three meters of Lake Bonneville sediments were eroded between 9,000-5,000 years ago. Evaporite deposition first occurred with a gradual increase in moisture from approximately 7,000 to 4,000 years ago. The saline pan’s deepest large halite interval was deposited during a cool, moist period from ~5,000 to ~3,000 years ago.

The Bonneville Salt Flats (BSF) is a valued and rapidly changing landscape. Much remains unknown about its age and the conditions it formed under. We aim to inform landscape management decisions and provide context for modern saline pan changes by determining its depositional history. We test two hypotheses. Hypothesis 1, which is the prevailing depositional model, is that BSF formed from the desiccation of Lake Bonneville with a climatic shift from moist to arid. Hypothesis 2 is that BSF formed after climate shifted from highly arid to cool and moist. After examining cores for evidence of Lake Bonneville sediments and dating core material, we concluded that hypothesis 2 is correct. Before Lake Bonneville, there was a shallow saline lake at BSF (>40 to 28 ka). Lake Bonneville was a deep, extensive lake from 28 to 15 ka. Because lake Bonneville sediments are absent in cores, we infer widespread deflation from ~10 to 5 ka. Multiple paleoenvironmental records indicate this was an extremely arid period. We found the oldest halite layer at BSF to <5 ka old. These results suggest that as the modern BSF becomes increasingly arid, there is potential for increased dust production and reduced crust extent. 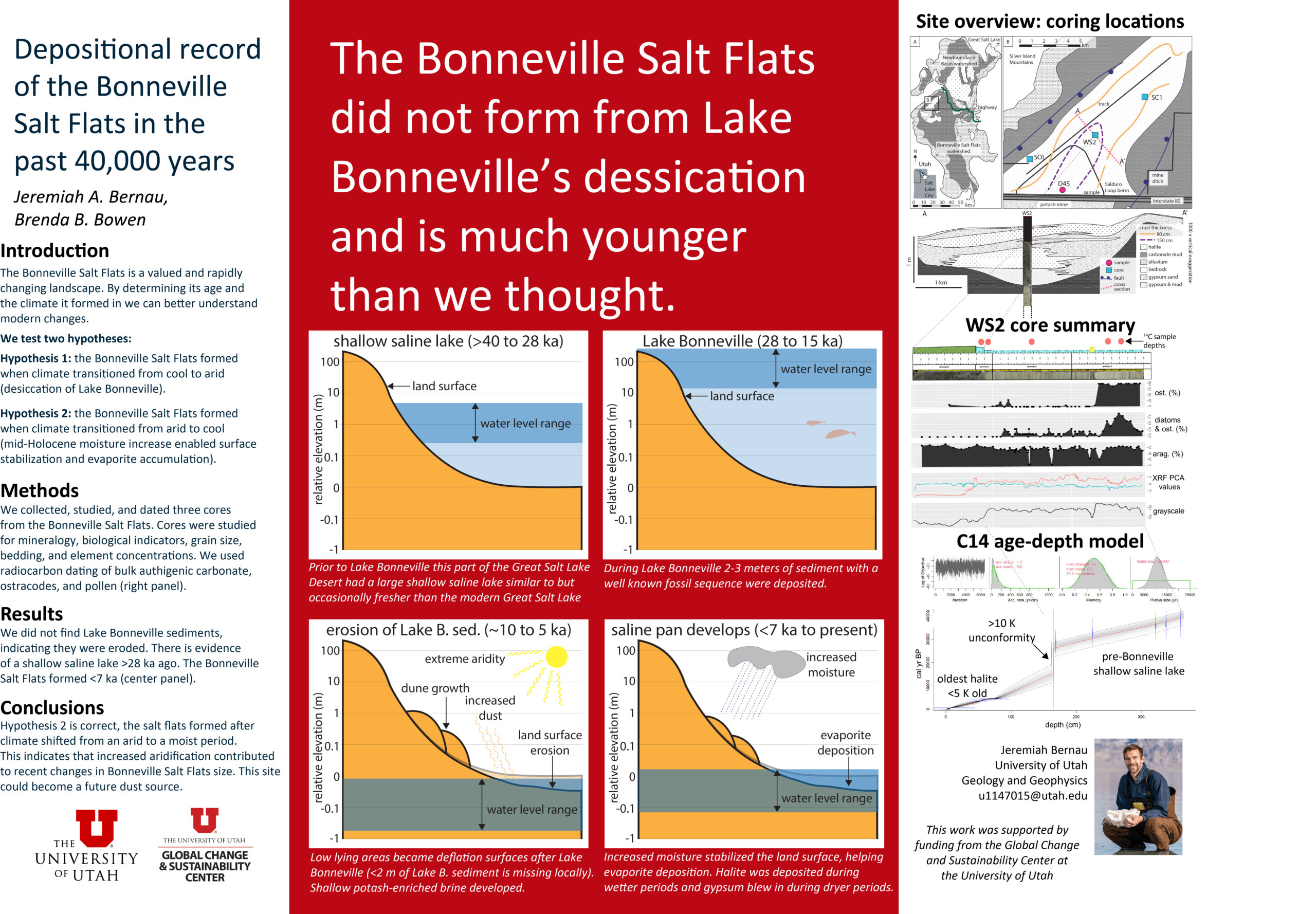