I work with Drs. Mitch Power (U. Geography) and Tyler Faith (U. Anthropology) to study Holocene paleoecology and fire activity within South Africa’s fynbos biome. I am currently building a high-resolution charcoal record spanning 4200 years at ~2-year timesteps to reconstruct burning activity and to understand the impacts of pastoralism and colonization on fire and landscape evolution. I also work with pollen datasets to investigate temporal and spatial changes in vegetative diversity, especially as it pertains to human impacts across southern Africa.

Fire is an ecological force modifying vegetation structure, global biogeochemical cycles, and climate and serving as a tool for humans to transform ecosystems, facilitate resource renewal, and attract herbivores. In southern Africa’s Cape Floristic Region (CFR), fire is an important selective force in the development and evolution of the Mediterranean fire-adapted fynbos vegetation. However, a detailed understanding of past burning activity and the ecological responses to fire events in the CFR remains largely undocumented. In this research, we use sedimentary charcoal influx (# of particles/cm2/year) at exceptionally high-resolution—approximately 2-year intervals—to reconstruct mid-Holocene burning activity at a coastal fynbos site, Eilandvlei, from South Africa’s southern coast. The mid-Holocene data suggests higher charcoal influx and peak magnitudes early in the record, followed by lower influx and magnitudes. This work sets the stage for an improved understanding of ecological change and the role of fire in shaping a highly biodiverse ecosystem.

This project is about reconstructing fire history in the fynbos biome over 4200 years and leveraging paleofire data to better understand present-day problems related to managing a fire-adapted ecosystem and balancing often-conflicting human needs.
To expand our understanding of how fynbos systems have evolved, baseline data are needed, including paleofire reconstructions that can be compared to existing records of climate through time. Current progress toward this goal illustrates the first-of-its-kind paleofire record spanning 4,200 to 2,900 years BP from Eilandvlei, a southern coast fynbos site. This 1300-year sedimentary charcoal reconstruction is shown as charcoal influx (charcoal particles/cm2/yr1), and reveals that fire frequency (# of fire events/ 100 years) and fire event magnitude (charcoal particles/cm2/peak) vary, with periods of both elevated and reduced fire activity. Additionally, spectral analyses show that fire return intervals have operated on multiple temporal scales over time, ranging from as frequent as 4 years to as infrequent at 64 years between fire episodes. This reconstruction is ongoing, but preliminary data suggests that under a predominately climate-driven system, fire operates differently from known historical fires that average 10-13 years between burns and that human impacts may have driven fynbos fire activity to novel historic baselines. This work also explores links between fire and global, continental and regional climate events, and shows here that fire in the fynbos may have responded to cooler and drier conditions at the end of the African Humid Period ~4,000 BP. 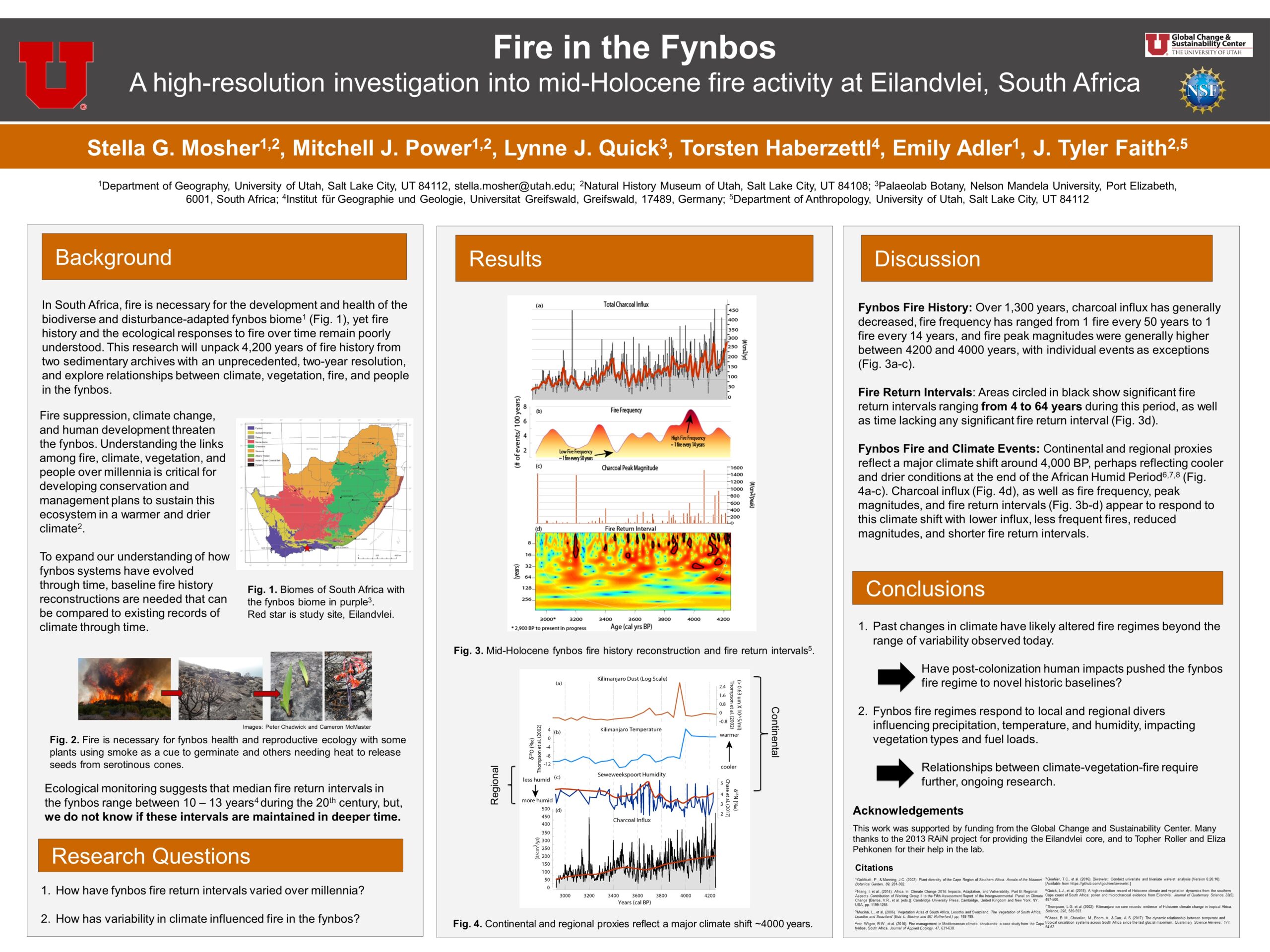