Fremont Occupation and Abandonment of the West Tavaputs Plateau: The Effects of Growing Season Length

I am a Ph.D. graduate at the University of Utah. Originally from Georgia, I came to the U for college and completed both my B.S. and M.S. My next stop is Denmark for a post-doc at Aarhus University. I have experience leading cultural resource management projects in Utah, Nevada, and California. My research uses insights from evolutionary ecology to explore the variation in both past and present human behavior. I am particularly interested in understanding the decisions people make regarding spatial distributions on regional scales.

Prehistoric farming populations on the West Tavaputs Plateau in the southwestern USA lived on the northern extent of where agriculture was possible. With its high plateaus and limited water sources, the arid environment resulted in both short growing seasons and little water. Combined with the effects of climatic variation during the Formative Period, we expect that the Fremont maize farmers in the region were sensitive to climatic variation, specifically agricultural productivity. Here, we address questions about Fremont behavioral responses to environmental variation. We use the ideal free distribution model to investigate the occupation and abandonment of habitats across the West Tavaputs Plateau. We find that neither occupation nor abandonment is driven by variation in precipitation and that settlement and abandonment events mirror each other, with lower-ranked habitats occupied last and abandoned first.

The West Tavaputs Plateau is in east-central Utah. During the Formative Period (2100-500 BP), the region was occupied by Native American maize farmers collectively referred to by archaeologists as the Fremont. They occupied and then abandoned the canyon all in a period of about 1000 years. To better understand the factors driving how the Fremont chose to use the landscape, I use the ideal free distribution model to derive two hypotheses about how the Fremont occupied and abandoned the landscape. Hypothesis 1 is that population density and habitat suitability negatively covary. As population densities grow, I expect people to occupy lower-ranked habitats. Hypothesis 2 is that the same process occurring during occupation is also occurring during abandonment. As a proxy for habitat suitability, I use the probability of cultivation, which is a measure derived from global observations of cultivated land. As a proxy for population density, I use a summed probability distribution constructed using 158 radiocarbon dates from the region. I find that my data support my hypotheses. As populations increase, people occupied lower-ranked habitats, and as populations decline, they abandoned lower-ranked habitats and contracted back into higher-ranked habitats. The implications of the findings are important not only locally for explaining land use patterns driving occupation and abandonment of the West Tavaputs Plateau but also within the context of the broader Southwestern USA. It is likely that the same patterns observed on the West Tavaputs Plateau were happening on a much broader scale and driven by regional social and environmental changes. 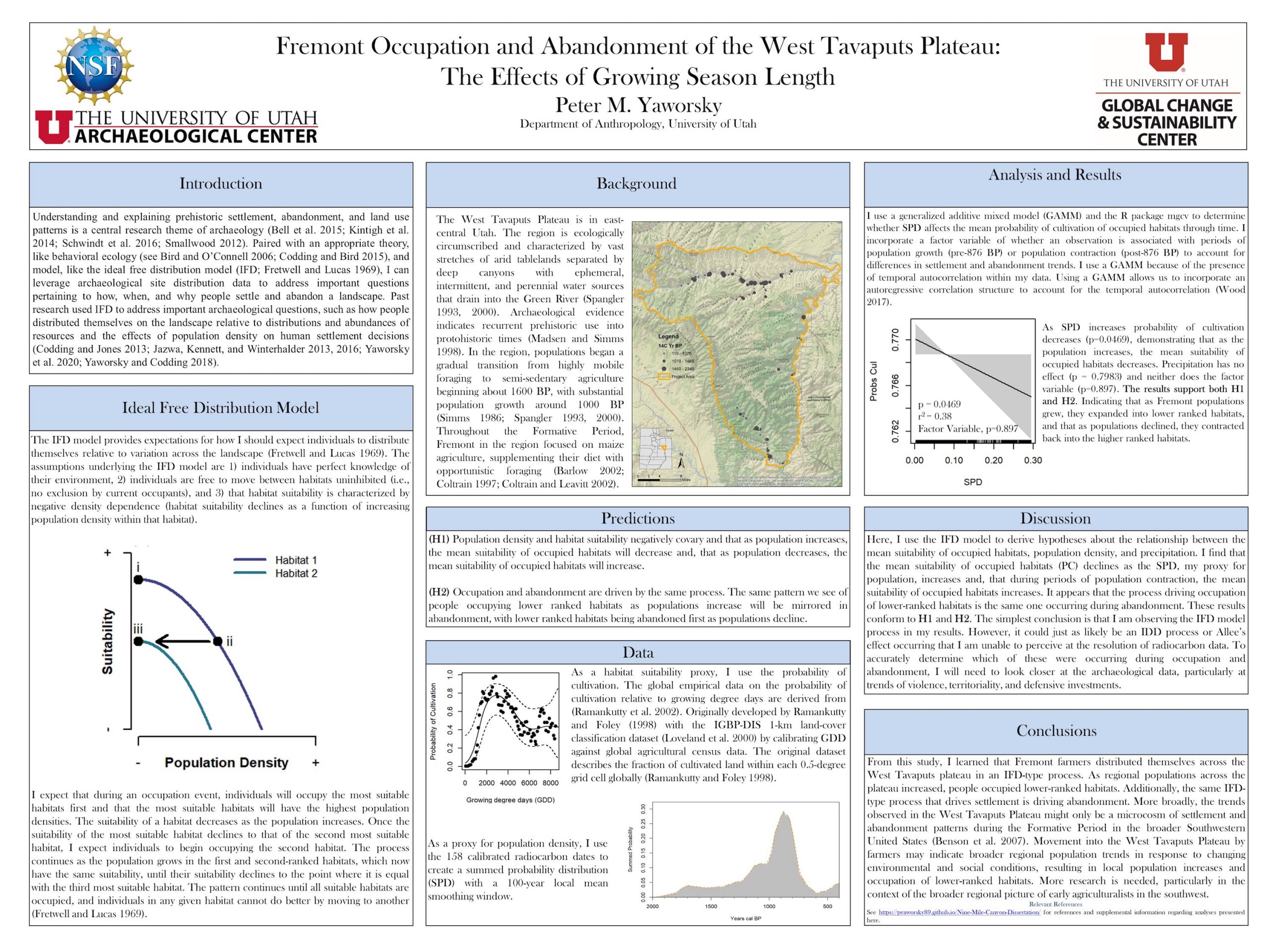