Vachel Carter (2011-12 GCSC fellow) is the lead author on a paper resulting from a study that assesses the human influence on prehistoric wildfires. GCSC affiliate faculty from multiple disciplines who were part of the study are: Simon Brewer and Andrea Brunelle, Department of Geography; Brian Codding, Department of Anthropology; and Mitchell J. Power, Natural History Museum of Utah. Such interdisciplinary research is a key aim of the GCSC.

The following is excerpted from an article by Lisa Potter in At the U.

“The study is the first in the region to combine charcoal, pollen, tree ring and archeological site data together to assess the human influence on prehistoric wildfires. The multiple disciplines allowed the researchers to make connections that would otherwise have been impossible.“

“If you were to visit the Great Basin and Colorado Plateau a thousand years ago, you’d find conditions remarkably familiar to the present. The climate was warm but drier than today. There were large populations of Indigenous people known as the Fremont, who hunted and grew crops in the area. With similar climate and moderate human activity, you might expect to see the types of wildfires that are now common to the American West: infrequent, gigantic and devastating. But you’d be wrong.

“In a new study led by the University of Utah, researchers found that the Fremont used small, frequent fires, a practice known as cultural burning, which reduced the risk for large-scale wildfire activity in mountain environments on the Fish Lake Plateau—even during periods of drought more extreme and prolonged than today.

“…In Utah, many forests could benefit from frequent, smaller fires to mitigate wildfire risk. Perhaps one of the most urgent is in the Fish Lake National Forest that guards Pando, a stand of 47,000 aspen tree clones and the most massive organism on Earth. Pando has sat at the south end of Fish Lake for thousands of years, at least—some say the organism is a million years old. In recent years, the beloved grove has been shrinking. Low severity fires may help Pando, and other Utah forests, stay healthy.

” “Fuels on the Fish Lake landscape are at the highest that they’ve been in the last 1,200 years. The climate is much warmer than it was in the past. Our droughts have not been as intense as we’ve seen in the past, but they’re on their way,” Carter said. “The Fremont likely created long-lasting legacies on the Fish Lake Plateau through their cultural burning. Moving forward, ‘good fire,’ like prescribed fire, will be needed to mitigate against wildfire risk.” “

You might think that the antidote to drought is rain, but there is more to ecosystem recovery than a period of generous rainfall. William Anderegg, Assistant Professor of Biology and GCSC faculty affiliate, studies how drought and climate change affect forest ecosystems, including tree physiology, species interactions, carbon cycling, and biosphere-atmosphere feedbacks. Anderegg is part of a team with a new publication that finds drought recovery times are strongly associated with climate and carbon cycle dynamics. Click to read the U News article. 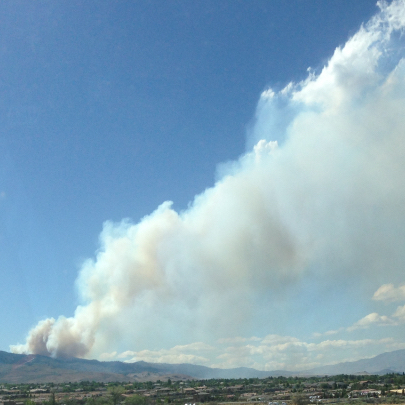