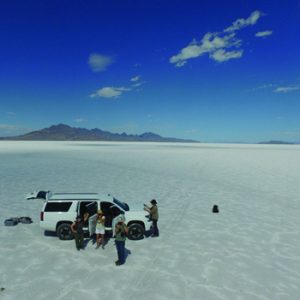 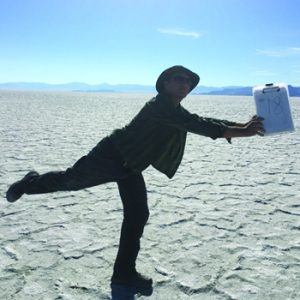 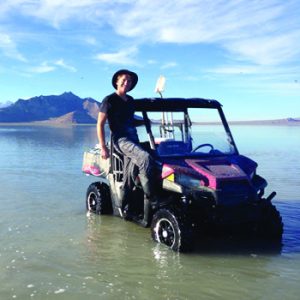 Evan Kipnis, PhD candidate in geology and geophysics, is not drawn to the traditional academic path. He is increasingly interested in empowering people from outside science fields to understand and apply research findings.

“Science only empowers society when it is understood by individuals in a variety of positions within society, and then Kipnis stated. “Can we broaden the scope of our community so that the information we share and what we learn from one another includes more than just scientists?”

Kipnis’ PhD work is the impetus for these concerns. He is researching the changing Bonneville Salt Flats with Dr. Brenda Bowen and the rest of the Bowen Research Group. The briny Bonneville Salt Flats (BSF) are becoming fresher and less dense. The research group’s NSF grant explores where the salt has gone and what factors are causing it to disappear.

The disintegrating salt flats have been heavily covered by local media, for good reason. Though the BSF is a dynamic geologic system that is constantly in flux, many Utahns are economically and culturally invested in the salt flats as they have existed in recent time.

“Our work has a number of stakeholder communities who are strongly advocating for certain courses of action,” Kipnis explained.

These stakeholders include the racing community, which requires a certain depth of salt crust to hold their annual races. There is a mining company that extracts minerals from the BSF to create potash, an element of the agricultural fertilizers used to feed the planet. Meanwhile, the Bureau of Land Management is mandated to protect the area for multiple uses, and is seeking information to make informed policy decisions.

Each of these groups has a strong investment in the status of the salt flats’ crust. What’s happening on top is inextricable from what is going on below – in the shallow aquifer just beneath the crust. Kipnis’ current charge is to explore how the briny aquifer is in contact with, and connected to the crust, and what kind of equilibrium is established between them. Through decades of geochemical data from wells drilled into the crust, spotty mining records, and large climate datasets, Kipnis hopes to understand not only what the equilibrium is, but also what is driving its change over time.

While Kipnis loves to “sit behind my computer looking at my data,” he’s increasingly concerned about how he, and other scientists, can effectively disseminate their research.

“We can do incredible research, but if we communicate it poorly, either it doesn’t get used or it could potentially cause harm,” Kipnis commented.

“The certificate is an opportunity for me to engage in some activities and skills that I wouldn’t normally; communication with broad audiences, understanding of the science/policy interface, and collaboration with graduate students from other disciplines,” Kipnis stated. “The certificate allows me an opportunity to interact with people outside of my own field, and take coursework that wouldn’t normally be part of a physical science PhD.”

Kipnis has also been a regular attendee of the GCSC Seminar Series while at the University of Utah. He credits the certificate and the seminar series with broadening his views, causing him “to confront perspectives and expertise far outside of my own field.”

He’s applying this broad perspective in a national setting, as the student representative for the American Geophysical Union’s Hydrology section. Participating in the recent national conference solidified Kipnis’ desire to be part of a new wave of scientific interpretation and communication for wider audiences – a critical topic that the American Geophysical Union hopes to address in the future.

He concluded, “Once we have information on a topic, I think it’s important that we advocate for decisions to be made using that knowledge.”