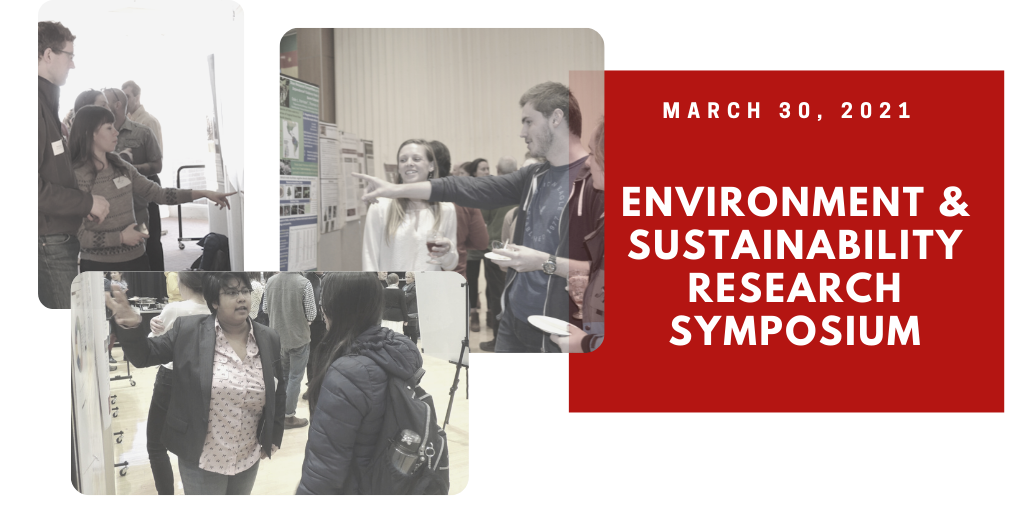 Welcome to the 2021 Virtual Symposium

Each spring, the Global Change & Sustainability Center hosts a research poster session where graduate students from across campus present their environment and sustainability related research to the public. On March 30, 2021, the symposium was held online, with live sessions featuring lightning presentations. Attendees then moved through breakout rooms to ask questions of student researchers and learn more about their work. This year's symposium was scaled down to showcase students whose research was supported with GCSC grants.

Please click through the links below to view students' posters and recorded presentations.

"Human Influence Alters Mammalian Diel Activity and Predator-Prey Overlap"
Humans alter how animals spend time feeding, moving, and breeding. Calculating these changes can help scientists understand what behaviors allow animals to adapt to living in cities. In this study, we show how living in cities makes animals change when they are active and how this change allows prey to escape pressure from predators.

"Who Wants to Go Camping? Potential for a New Record of the Paleocene-Eocene Thermal Maximum in Utah"

There was a global warming event just after the dinosaurs went extinct that was caused by a release of carbon dioxide into the air, similar to modern climate change. We try to find rocks that were formed during this time to learn more about how places change with global warming events. We find evidence that sediments in Nine Mile Canyon, UT may record this event.

"Diversification of iron-biomineralizing organisms during the Paleocene-Eocene Thermal Maximum: Evidence from quantitative unmixing of magnetic signatures of conventional and giant magnetofossils"
Magnetofossils are fossilized magnetic particles made by magnetotactic bacteria and other microbes. They are geologically significant because they record environmental and ecological information like bacterial diversity and marine oxygen levels. Here, we test if sensitive magnetic measurements can discriminate between different sizes and shapes of magnetofossils within marine sediments that record rapid global warming 56 million years ago, the largest global warming event in the past ~80 million years. These findings have important implications for tracking the timing and extent of oxygen and nutrient changes in the ocean due to climate change.

"Drivers of Insect Seasonality in Yasuni, Ecuador"
The study of phenology asks, ‘When do biological events such as fruiting, flowering, growth, dispersal, and reproduction occur, and why at those times?’ While seasonal cycles of temperature, day length and rainfall are often taken as a simple fact of life in the temperate zone, they are far less intuitive in tropical forests. For my PhD. dissertation I set out to understand why some insects in a tropical rainforest located in eastern Ecuador maintain a seasonal life cycle despite the fact that weather conditions are constant year round. To understand this process I surveyed the insect community every month fo nearly two years tracking which species are active each month and collecting data on weather conditions, the abundance of food and how often insects died due to predation. From these data I hope to determine why insects are seasonal in these forests.

"Solutions for Some or For All? Environmental Ethics in City Sustainable Development"
Cities struggle to equitably plan and implement climate action to best serve vulnerable populations. I look at how four global cities (Buenos Aires, Ho Chi Minh City, Seoul, and Mexico City) are balancing ambitious climate action planning with needs of the most vulnerable in their cities. I find that cities often miss the mark and end up exacerbating in equalities when climate action planning.

"Which Neighborhood Has Street Greenery for Active Living?: Evidence from Western U.S. Urban Areas"
Easily accessible street greenery, including trees, grass, and shrubs, might have a high potential to support outdoor physical activity for a wide range of people. However, whether street greenery is equitably distributed across socioeconomic, racial/ethnic, and age groups has not been fully explored. This study presents a novel method of measuring street greenery and examines whether street greenery distribution has environmental justice issues that urban planners need to address.

"Investigating Niche Segregation Across a Woodrat Hybrid Zone"
We are investigating how the behaviors and genetics of animals allows different species to co-occur together in nature. Global climate change is causing many species to move into new habitats causing novel competition between species for resources. By developing a better understanding of the interactions between species that occur together in the wild, we can identify what behaviors or traits correlate with species success in habitats experiencing environmental change.

"Quantifying the fitness effect of sensory learning as a function of environmental complexity"
When animals are searching for food, sometimes it makes sense to follow a simple rule, and other times they might need to learn about the environment and change what they do. We use math to figure out when it is worth learning, and how they should learn.

"Development of a resilience framework to understand a coupled human-natural system in Baja California, Mexico"
Water resources are important for people, who in turn affect water availability and quality. We propose a new, simple way to explore when and where people and water are (and are not) able to respond to change over the same time- and space- scales. We then describe the relationship between people and their water resources in a small community in rural Mexico.

"Impact of ectomycorrhizal fungal diversity on aspen gene regulation"
Most temperate trees have a beneficial relationship with ectomycorrhizal fungi, and hundreds of these fungi can colonize a single tree. However, we don't know how these different fungi interact and what interactions mean for the host plant. To figure this out we are identifying what genes are used when fungi colonize a host plant alone, and what genes are used when there is a second fungus there to try and figure out what competition means for this fungus-plant relationship.

"Trait variation across space and time underlie the drought ecophysiology of two tree species"
Some populations of tree species can tolerate drought while others cannot. Drought tolerance is due to differences in functional traits, features of the trees that affect their ability to tolerate stress such as leaf area or wood strength. This project investigates how much functional traits vary in aspen and ponderosa pine tree populations and how that variation affects drought tolerance.

"En Masse: (dis)organization and (dis)placement in Holyoke"
My research will be looking at the health and wellbeing of displaced Puerto Rican communities. I will be paying specific attention to why certain small towns have attracted migration, what are some of the lived experiences of displaced people, how can displacement can be understood as social determinant of health and what have the local government and nonprofit organization done to improve the living conditions of immigrants.

"Water Supply and Vulnerability Assessment at sub-basin scale in Nepal"
My project's overarching theme is to see if the hydro basins of Nepal are either water-rich or water-poor. My research studies what role factors such as rain, snow, glacier melt, and water stored in lakes and reservoirs play in defining a region's water supply. The water supply capacity of a basin will also help determine if the population living downstream is vulnerable to water scarcity in the near future.

"CRUDE: Cultivating Pleasure in (spite of) Petroleum Culture"
As our climate crisis intensifies, we must change our relationship to our energy systems. But this doesn't have to be entirely unpleasant. It can also be pleasurable.

"Atmospheric Observations of New Particle Formation and Ozone at Storm Peak Laboratory During Spring 2014"
In the atmosphere, there are an abundance of tiny particles called aerosols that can originate from natural emissions, or anthropogenic (human caused) emissions. Under ambient conditions, such as those at high-altitude mountaintops, atmospheric gas reactions can lead to aerosol formation. In order to better understand the conditions that lead to aerosol formation, we analyze aerosol data and ozone concentrations from spring 2014 at Storm Peak Lab in Steamboat Springs, CO.

"Fremont Occupation and Abandonment of the West Tavaputs Plateau: The Effects of Growing Season Length"
Prehistoric Native American farmers in east-central Utah occupied and abandoned the region all in about 1300 years. Here, I test whether the settlement and abandonment patterns were driven by environmental conditions suitable for farming—specifically, precipitation and growing season length.

"Source Rock Prediction for Optimizing Unconventional Targets: Agrio Formation Neuquén Basin, Argentina"
Oil and gas reservoirs could represent hundreds to thousands meters of rock, both hydrocarbon producing and nonproducing intervals. By specifically identifying source intervals (for example, a few tens of meters) through modeling and prediction, non-producing zones could be filtered out. Specific targeting of source-rich zones can reduce environmental land impact and drilling resources can be minimized.

"Experimental research of potential methods for defluorination of PFAS"
PFAS can be found in the microwave popcorn packages, the pizza boxes, the non-stick pan, and in many cases, the water that you consume. PFAS are now threatening the US food supply and contaminating thousands of potable water sources, causing illnesses to animals and people exposed to the chemical. Man-made chemicals such as PFAS are present worldwide and are contaminating water supplies for animals and people. A sustainable and environmentally friendly method is needed to treat the waters and soils contaminated with PFAS.

"Understanding Inhibition of Anammox Activity by Nitrite, Sulfide and Recalcitrant Carbons at a Functional Gene Level"
This project's main goal was to examine the inhibition mechanisms of a new, efficient and powerful  process to remove nutrient (fixed nitrogen) called anaerobic ammonium oxidation (anammox) by common contaminants in wastewater. Findings from this study will improve our understanding of the inhibition of anammox. These understandings will help for troubleshooting as well as improving the efficiency of the anammox reactor.